I got my first Camaro Brochure in early September of 1968.  I was at the ‘Great Allentown Fair’, and drooled over what I  thought was a new model of Corvair.  There was a line of people in front of a tent – and the sign said “FREE” – so my brother and I stood at the end, and eventually ended up inside – for the ‘Chevy Show’.  The Chevy Show was a small theater style set up with a movie screen showing a close up view, looking out the windshield of various Chevrolet models while on winding roads, and beautiful panoramas.  The seats vibrated over the imagined bumps – unheard of at the time…..it made you think you were driving the car.  Although I spent countless hours as a kid, playing with models and ‘Matchbox’ cars; I was now seriously hooked on cars.  Damned GM!  Afterward, there was a stack of various brochures at the exit, and I grabbed a Vette brochure along with one of that new Corvair.  It turned out  not to be a Corvair, but a relatively new model of Chevrolet – the Camaro.  The cover was an RS….red….ralley wheels…going around a corner.  Love.  A year after picking up that brochure, I had my junior driver’s license; and before my license was a year old, I was driving a ’68 RS.  Sure, I had it towed home from a junkyard, but I fixed it up, and it looked great.  Still hard to believe, as I am not that good of mechanic. 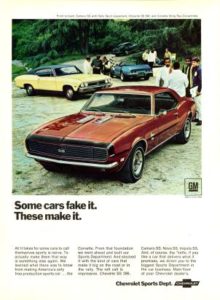 I still have that brochure, and about a hundred more.  I have at least one copy from every year up to 2002, including a year or two when GM only made a large combined catalog including all the Chevrolet models.   Most of the 5th and 6th gen brochures are there also, waiting to be put in order.

Other related Camaro collectibles are old magazine ads, dealer posters, and the Camaro record that was available from Cheverolet Dealers back in first gen era. Dealer flags are great collectibles…there are a few from the late 60’s and early 70’s….and also a few from the 4th gen period, including a black flag with the 35th Anniversary logo.   Around 2003, some full size highway Camaro billboards made their way into flea markets (there is one in all it’s glory on my garage wall).

One of my favorite and rare pieces is a dealer poster from 1997.  The 3oth Anniversary Camaro brochure had a fold out of of an antique Gilmore gas station with the famous white and orange ’69 Pace Car on one side of the pumps,  and a ’97 white and orange LE convertible on the other side of the pumps.  Very frame-able.  The rare dealer poster, however, is the same scene in front of the same old gas station, but has people in it!  A twenty-something gal and guy are chatting, comparing their Camaros, while the station attendant leans out of the doorway, drooling over the beautiful cars.

Sure, driving Camaros is more fun, but on chilly winter afternoons, it is still great to get out the boxes of brochures and pamphlets, and bring back great memories. Camaro Magazine Ad – Separates the men from the toys. Camaro Magazine Ad – Chevrolet Side of the Tracks The Day the Panther Died

ONE OF THE FOLLOWING